As of this morning, I'm putting myself on the injured list for awhile and staying off the floor. Just too much recurring back pain. Since routine classes have been leaving by back in agony, I think I'll cool it for a few weeks. Sadly, no bugo for me today. 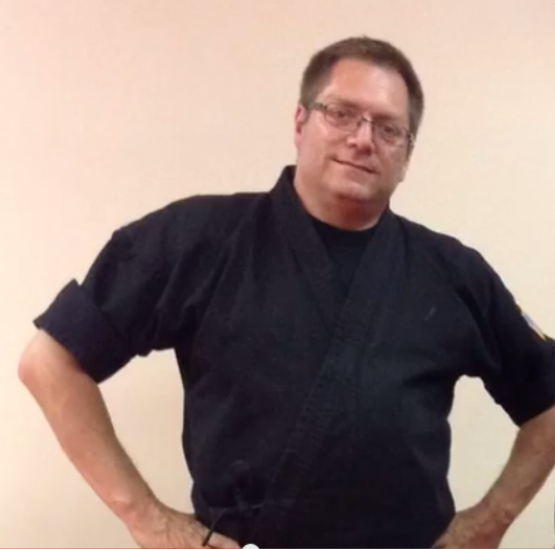 While I was NOT in class this morning, one of the instructors said he spent some time reading this blog and noted some questions that I had asked (he must have been reading some
old posts) and some errors on how I'm writing the words. I'm grateful that he took the time to help. Thanks Mr. Vince (now the Sensei of Five Rings Elite Martial Arts Academy in Plantation Florida, this update in July 2014).

It's Three Set Kumite (not kuma tai as I've long had listed on the left menu bar) . Oops, I'll fix it soon. Thanks for the correction. He also told me that all of our words are Japanese in origin, not Chinese or Korean.
On another note, Jonathan Weeks explained to me the spelling and background of the standard greeting that we use in the dojo: "Ous" (which is how it is said) is really spelled OSU. While the definition/origin is actually unknown, "OSU" typically means "YES"!! Or "ALRIGHT" and/or "YOU-ROCK" amongst our Martial Arts "home-ies". It is most appropriately used ONLY by those practicing in the arenas of Karate or MMA. Kinda like a "gang-word" that only the gang can understand.

Update from July 2014: I just read a great article by a self-proclaimed "karate nerd" and "handsome elite athlete" (I'm directly quoting him, I personally have no oinion as to his handsomeness, athleticism, or intellectual obsessions) about the term OSU and how it shouldn't and should be used:  http://www.karatebyjesse.com/meaning-oss-osu-japanese